A copy of the article from the Times By Tom Knowles 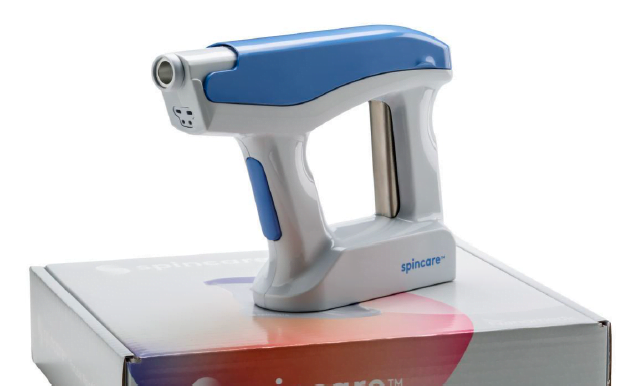 A gun that sprays out a protective web of synthetic skin to cover burns and wounds could soon be used by doctors, allowing patients to avoid the pain of re-dressing wounds with bandages. The handheld battery-powered device uses a laser to target the injured area and then spins a breathable mesh that mimics the structure of real skin. Nanomedic, the Israeli company that invented the gun, called Spincare, says that it allows burns patients to move more easily and to shower, which is often difficult with traditional bandages. The mesh also becomes transparent after it is applied, allowing doctors to examine the wound without touching it. It avoids the need to remove and reapply bandages, which can often cause even more pain for patients. 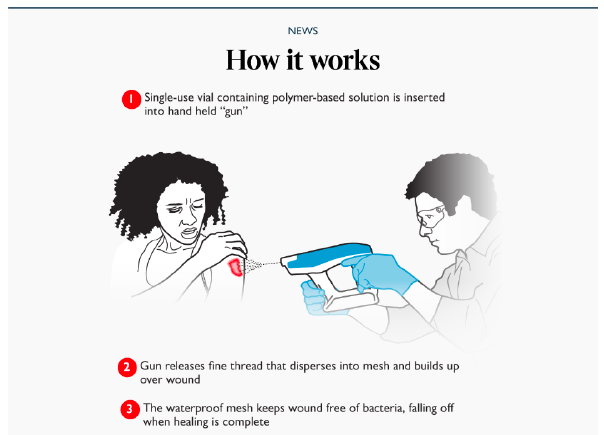 The gun is being tested at Queen Victoria Hospital in East Grinstead, West Sussex, which is recognised for its specialist burns and reconstructive surgery units, and where eight patients have had the new treatment.
The gun is loaded with a vial of liquid that is transformed into fine threads through the use of a small electric current. This is known as electrospinning, and has been used in medicine for decades, but has normally been reserved to big and highly sophisticated machines. Nanomedic says it is the only company that has turned the technology into a portable device that can be used in ambulances as well as hospitals. The small threads then weave together to form a dry dressing over the wound, which comes off naturally as the skin heals underneath. Baljit Dheansa, a consultant plastic surgeon at Queen Victoria, said that while the threads shooting out of the gun were initially too fine to be seen, “at the edges you’ll see a web of fine white tissue. When you look at it under the microscope it resembles this fine mesh weave that allows fluid to come through but also stays stuck to the wound underneath. It protects it, reduces pain, reduces the overall amount of fluid and also means that you don’t expose the raw surface of the wound until it’s fully healed.” Nanomedic, which is also testing its Spincare system in Israel and elsewhere in Europe, believes it could help rehabilitate burns patients dramatically.

Part of the Joint Operations family

OUT OF HOURS BURNS SUPPORT: